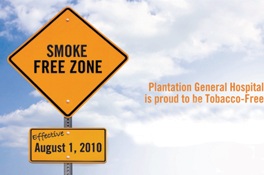 Plantation General Hospital (PGH) officially went smoke-free on August 1, 2010. After this time, no tobacco use of any kind will be permitted — inside or outside — on hospital property. This initiative will include the elimination of designated areas outside PGH where employees, patients and visitors are currently permitted to use tobacco products.

As a healthcare organization, we are committed to the health and safety of our employees and patients. We believe that we have a responsibility to take a leadership role on this major health issue, and establishing our entire campus as tobacco-free firmly supports that belief.

The US Surgeon General has confirmed that exposure to secondhand tobacco smoke is a serious health hazard and that there is no risk-free level of exposure. Tobacco use in and around hospitals poses health and safety risks for patients, employees and visitors.